For everyone striving to publish their writing and/or illustrations, here is my advice–look beyond the goal of simply obtaining a contract. I did not do this. I honed my craft, went to conferences, networked and joined critique groups. But I absolutely never sat in on a session that was above my station. I figured I would have plenty of time to figure out what comes next IF I ever got published. I also thought those details would be the fun part. How to market your book. What swag to prepare for school visits and book festivals. I looked at the contract as the finish line–and the life beyond as a dream come true.

But here is the hard part–now that I am published, I feel like I am on the bottom rung of a new ladder. I thought for sure that the books acquired by two different publishers would leave their hands in perfect shape. I had faith that our combined efforts were making the best books possible. But now I realize that everyone else is doing the same thing–and there are A LOT OF AWESOME BOOKS! Many this year, but countless others year after year, going back decades.

So what do schools and libraries rely on to stock their shelves with great books? Professional reviews. I know now that it is very special if someone says something nice about your book–because many reviewers say lots of mediocre or downright not-nice things. Here is an excerpt from a professional review of a well-known author's book:


Frenetic illustrations in muted neutrals show the various situations, clearly meant to be hilariously reprehensible but mostly appearing mean-spirited instead. The ultimate joke, on readers as well as the narrator, is that the opening question was literal. The revelation of the (real) big elephant is amusing but not enough to save this one-note story, the joke of which will have to be explained to many a child. Ardent fans won’t mind—but this could have been better.  (Picture book. 4-8)

Ouch! Another hero of mine suffered this critique of one of my favorite books:


Squeaker, perhaps intentionally, is undeveloped and unconvincing, but the blocky bears are appealing. The story lacks depth and subtlety, although young children may find the role reversal hilarious, and the catchy title and ’50s nouveau art provide a soupçon of charm. (Picture book. 4-7)

I think this reviewer just learned the word "soupçon" and wanted to find a place to use it. SO mean! Or maybe reviewers have stacks of books to get through, and in the process, lose their sense of humor.

The text is snarky-conversational with a contemporarily colloquial feel. On first read, children may enjoy the funny pictures and silly text and situations, but, rather like a rainbow-colored belch, it’s not substantial enough to sustain many return visits.

Best seen as a joke gift for a unicorn lover. (Picture Book. 2-6)

I didn't reveal the names of the authors because I'd really hate someone to dig through and find crummy quotes and post them online from my reviews. But what I can tell you–these are all very famous authors with multiple books under their belts. AND! They also received much coveted starred reviews for their other books–from this same review site! So if seasoned professionals, who make great books, receive this sort of critique, how the heck am I supposed to do well? I just received my second Kirkus review in 9 months, and I'm starting to realize the thick skin necessary to endure editor rejections continues well past publication.

As the sting of a mediocre review starts to fade, and the camaraderie of my critique peeps boosts my spirits, I realize that these reviews make me want to work so much harder on my next project. Once the book is released into the world, how it is received is out of our control. As much as I may want to gear the next book to impress a sophisticated critic, pandering isn't going to work. And nor should it. My audience is a bunch of young readers, eager to connect with interesting characters and worlds. If a reviewer has an underwhelming report, but a child dressed as the character for Halloween, I take the latter as a sign of success. Or, if they take their photo next to the statue that the book is about, that melts my heart. (Photo of friends in Florence, Italy. RENATO AND THE LION is on the phone screen.) 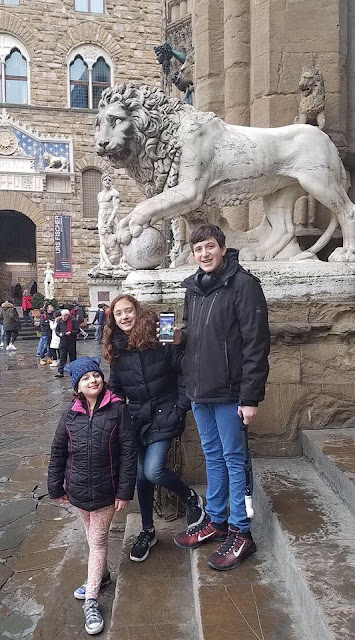 I've met authors that choose to read no reviews, professional or otherwise, and just dig back into their work. I'm far too curious to follow that path. So I'm stuck in the pull-myself-up-by-my-bootstraps camp and try like hell to make a better book next time.

If you ever need a shoulder to whimper on while reading your own reviews, I'm here for you!
(I'll also share more lessons post-publication on subsequent blog articles.)


RENATO AND THE LION
and
QUINCY: The Chameleon Who Couldn't Blend In
by Barbara DiLorenzo

Posted by Barbara DiLorenzo at 12:03 AM