I Never Dreamed We Would Be Here - By Barbara DiLorenzo

At the end of the school year, I hardly notice anything on my calendar that isn't essential. But looking over our paper calendar, I noticed "World Refugee Day" printed under the number 20. One year ago, on June 20, my debut picture book, RENATO AND THE LION, arrived in bookstores. I celebrated the release with friends at  SCBWI Eastern PA (thank you, Virginia Law Manning!) but was still in a fog due to a new baby in the house. I didn't notice that the publishers had picked June 20, World Refugee Day, as the book's release date.

To be honest, when I wrote the story, I was crafting something that felt connected to a different time. I didn't think that the story of a boy fleeing from Europe in WWII would be relevant to children today. I wasn't sure a story about WWII would be appropriate or interest young readers. The editor, in her wisdom, assured me that children across the globe still dealt with war and the effects of violence– and that this story was relevant. But in my naivete, I imagined my audience more connected to happier stories with brighter colors.

I never imagined we would be here.

I never, in my wildest thoughts, could have anticipated a school visit like the one I had today, where I felt bold in stating to the audience: "Here is an illustration of refugees fleeing a country at war to come to the United States–because President Roosevelt wanted these men, women, and children to be safe." I said this sentence out loud, wondering if I had crossed a line, made the presentation uncomfortably political. This sentence! A sentence which in a prior administration, would have been yawningly boring. I could imagine a younger me in an audience in the 1980's hearing that, and thinking, "Yes, yes, we welcome people. We are the United States of America. That's our thing. Not really news." 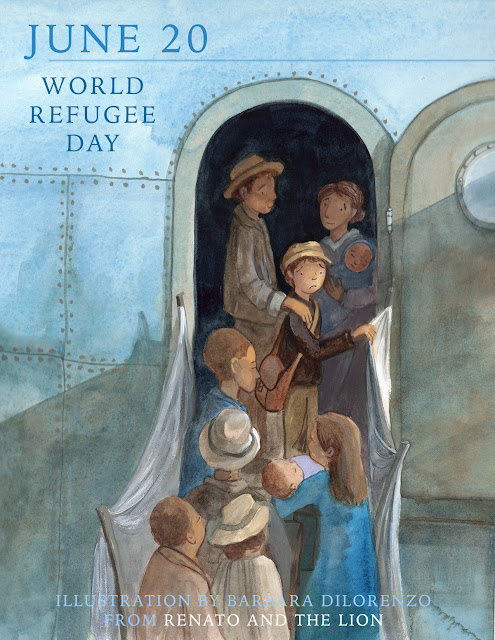 But today, news of children, of refugees at our border, being used as a political pawn in a game where our current administration wants to deter more folks from entering our country–this sentence felt like a small protest. I wanted the children in the audience to know that despite what all the adults think today, 74 years ago adults did something different. As a country, we've gotten so much wrong in terms of human rights. But for one moment, our president did the right thing in bringing people here, away from war. Once they arrived, unfortunately, they were carted up to Oswego, NY, where they lived in an encampment. But the children were allowed to go to school in town, and families were kept together. At the end of the war, the refugees were allowed to become citizens. Some returned to Europe, but most stayed. One became a restauranteur–Doris Schechter (see illustration outlining Easter Eggs in the book–like her portrait–below). I recommend her restaurant, My Most Favorite Food–on the Upper West Side of Manhattan. It's delicious! 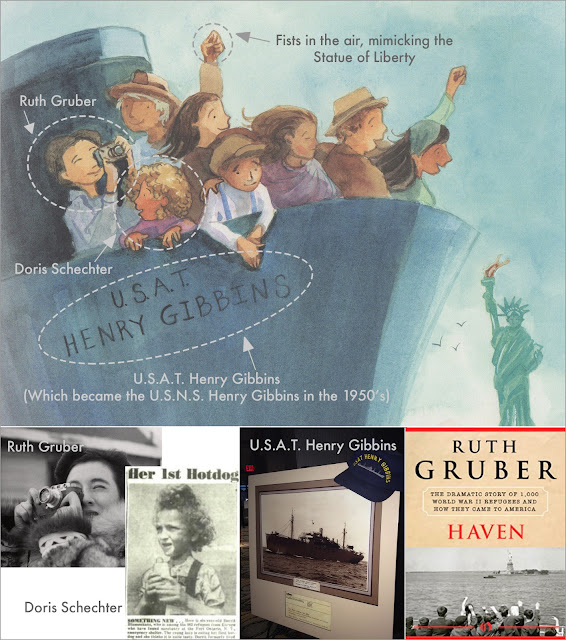 Although I wrote the story, and write about the current political crisis here, on a blog, I feel so powerless. All I can think of is that when I wrote this book–I wondered over and over how people could allow their leaders to work in such dark ways. I wondered how much the average citizens knew. I wondered how deep the racism and anti-semitism ran throughout the countries in Europe. I wondered about everything.

Sadly, I feel like I don't have to wonder anymore.

But along with fellow writers, I feel an obligation to bring hope to younger readers–even when I feel a little scared myself. Dark days have been a part of our history before. But as the Reverand Martin Luther King, Jr said, “Let us realize the arc of the moral universe is long, but it bends toward justice.”

But the kids involved in today's refugee crisis don't have time to see this arc play out. To get involved, please visit: https://www.publishersweekly.com/pw/by-topic/childrens/childrens-industry-news/article/77293-kid-lit-campaign-rallies-against-immigration-horrors.html

Thoughts expressed here do not necessarily reflect those of the group. No one has said otherwise, but I would not presume to speak for everyone.

Posted by Barbara DiLorenzo at 12:45 AM 4 comments:

Yesterday, the Drawn to Picture Books Blog activated an old post, and sent it out to folks. For the life of me, I can't understand how that happened. I thought maybe I had set a time for it to release and typed the wrong year. But June would have been too early for the post to have appeared last year. My best guess is that the blog felt ignored, gained sentience, and nudged us to get going again.

I see you, Drawn to Picture Books Blog–happy to oblige. 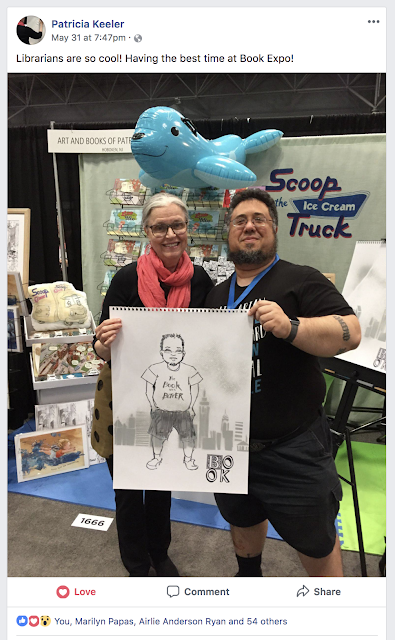 I was already thinking of writing a blog about this past weekend's SCBWI New Jersey Summer Conference. We were missing one of our members, lost to the wilds of Book Expo America. (Patricia Keeler, drawing on the spot, impressing all the librarians!) But everyone else was present. It was amazing to catch up in person, talk about our projects, and share our ongoing challenges. We also discussed sharing work with each other again–something, like the blog, that had taken a back seat when everyone got busy with actual book work.

I realized during the conference that those outside opinions, other eyes on the projects, really do help us revise and refine our work until it's closer to presentation-worthy. I had a workshop before a one-on-one critique – and information from both brought a new idea forth for my current book dummy. That one idea would not have happened with me alone in my studio–I needed other eyes on my project. And that idea could be the element that brings the story across the finish line.

Going to the conference was also very helpful in reiterating that publishing is hard work, and the best of the best get rejected–but they don't ever quit. I think I'll need that message until my last moments drawing and writing. The keynote speaker on Sunday, Tami Charles, brought that point home in her closing remarks.

I was very happy to see many friends enjoy leads to follow up with editors or agents. Some earned representation solely from this weekend. New folks were encouraged, which encouraged me. Seasoned writers and illustrators took in the workshops with a sense of calm purpose. I liked seeing that. The desperate energy I carried with me at my first NJ SCBWI conference was most likely offputting. These veterans confidently presented workshops and attended others. Some participated in the art show, but others–having won before–sat back to let others have a turn.

What I was most struck by at the conference was Paul O. Zelinsky. He gave a great keynote address on Saturday. I could have listened to him speak for hours more than he was alotted. After that, for the rest of the weekend, friends and I kept bumping into him and having terrific conversations. From discussions about the pattern of his shirt (all the scenes from Z IS FOR MOOSE) to answering questions about publishing–he was so dang approachable, friendly, and funny. He is a giant in the industry. Friends for years with Maurice Sendak. (The photo below was taken from his Facebook page.) But he was still willing to answer questions about the editor/illustrator relationship with newbies. I thought his work was amazing before I met him, and was always a fan. But now I'm a fan of Paul, the person.

I missed the conference in 2016 due to a funeral. And in 2017, I was financially strapped, with a new baby, and a book that had just come out–so completely overwhelmed. The previous conference I attended was in 2015. Because it had been so long, and I was missing friends and the world of kidlit, I volunteered for the NJ chapter of SCBWI just so that I would have no excuses to miss this year's conference. I'm so glad I did.

I'm also glad I did, because for the first time ever, my illustration earned a nod in the art show. So did Mike Ciccotello's piece. It felt good to be up on the stage with my friend. I don't expect that to happen again–but that warm sunshine glow of that moment will be kept in my heart for those dark moments of doubt that creep in far too regularly.

If you have the opportunity, get involved with your local SCBWI chapter. You will come home from an event with a feeling of validation–that what you are doing is important work. And the knowledge that you are not alone at all. Writers and illustrators all around the globe, who may not even speak your language, have your back. And want to give you the confidence to keep moving forward and never quit.

Now to go order fabric with Paul O. Zelinsky's awesome pattern on it! 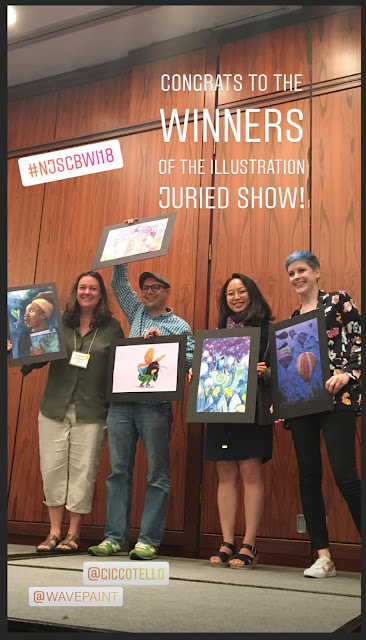 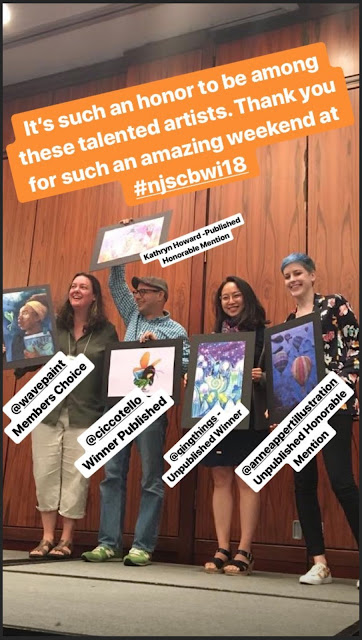 Posted by Barbara DiLorenzo at 8:48 AM 10 comments: