Sucked In - By Deborah Cuneo


Have you ever noticed those sponsored ads that randomly pop up on your social media feeds? They just happen to be a product that was exactly of your interest and for a great price too (of course), so you just have to click on it, right? No?... Just me?

Well I have, it was and yes...I did. The product was a Body Kun, articulated sketch model...translated: a glorified, overpriced, cheaply made naked action figure. I had seen these things on and off over the years, but never really had given it too much thought until a few months ago. I was working on a project (another one I can't share yet) that had a lot of humans in it.  I couldn't find the poses in the povs  I needed and my only available models were either canine, feline or humans that were always too busy to pose for me.

After endless hours of less than fruitful Google searching, I succumbed to the pressure of one of the pop-ups from "The Best Deals" (of course it would be named that) and clicked on the ad. I almost choked on the price, despite the "One time only, 50% off sale!!" (said in your best, loudly exaggerated, tv-salesman voice ). But, it truly seemed to be the answer to my situation and it came with really cool, extra miniature body parts and accessories to draw, so I bit the bullet, ignored the soft voice in my ear whispering "suckerrrr" and pressed "place order".

Ok...so after a couple of weeks, my brain had somehow justified the purchase of not one but two (a male and female version) and I was actually excited by the time my shipment arrived. I set up my sketching supplies and opened the box and there they were!! They were a lot tinier than they appeared on my screen, but no biggie. I was going to set them up and photograph them so, I'd be able to enlarge it later.

I opened up the package with the woman first. She was in pieces...teeny, tiny, little pieces that didn't want to go back together no matter how many hours I tried. No problem, I'm adaptable, if anything... I would use the guy for both, for now. Fortunately that one was intact...till I tried to gently pose it, at which point I snapped the little dude in half. This one went back together easier than the female, until I tried to pose him again. After a few more times of performing micro surgery to put him back together (not to mention that the voice in my ear was now repeatedly screaming the word sucker) , I decided to email for a full refund.

Fortunately, their customer service was pretty good and they got back to me right away. They were also excellent salespeople too, ugh. Shortly after, I received two, free of charge,  brand new, male and female action figurines in the mail, that were actually intact...even after I touched them! I immediately set up my photo shoots and was able to draw the poses I was after. Yay, a happy ending...sort of. 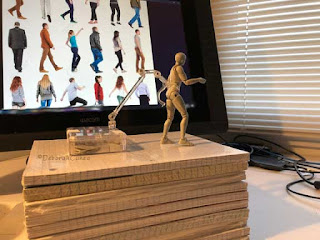 So,  the bottom line review on this product...


I think the initial idea was a good one, because there is a true need for an articulated figure of this nature, but the product itself is really poor quality! For what it's worth, I give it a 1.5 to 2 out of 5 stars for quality and pricing,  and a 4.5 for usefulness.

They are very cheaply made and questionably priced ( I've noticed that whatever the sale, they are always the same cost in the end, hmmm...).  But, if you can get past fumbling with a defective stand and figurine, tiny parts that you need tweezers and a magnifying glass to see, pick up and put together, and the fact that the figurines are still a tad on the fragile side (understatement!),  they actually are super handy for getting that exact pose, in the exact point of view that you're looking for!

But buyer beware, for sure!!