This blog has been such a great outlet for sharing thoughts on the field of children's literature. I'm grateful for my fellow bloggers on Drawn to Picture Books that keep the focus on the process of drawing. I can tend to shift to politics–especially in this charged atmosphere. But although I had prepared an entire piece on comparing and contrasting what happened in Charlottesville, VA with the protection of art in WWII Florence, Italy–I realize this audience is smart enough to know the difference. These thoughts belong on a different blog–and perhaps I'll post that essay on www.renatoandthelion.com.

Getting back to the nuts and bolts of picture book making, I've chosen to share the drawing steps for a new piece. I am fascinated by restaurants and the people that work behind the scenes. So I've been noodling (ha!) with a book dummy on the subject for some time. The Society of Illustrators has a Members Open show this fall with the topic of food–so I'm using this as an excuse to create a final piece to go with the book dummy.

The first version of the dummy had a penguin and a polar bear. I don't have a concrete reason for picking the polar bear other than I doodled a chef polar bear with a penguin overlooking at an SCBWI conference many years ago. I know, I know. North and South pole creatures don't meet naturally. I had a back story to explain this in the first version. But despite loving the characters, I realized this was forced. I still think the characters should be animals because children can't open and run a restaurant–but anthropomorphic bears and penguins can and still be relatable to kids. 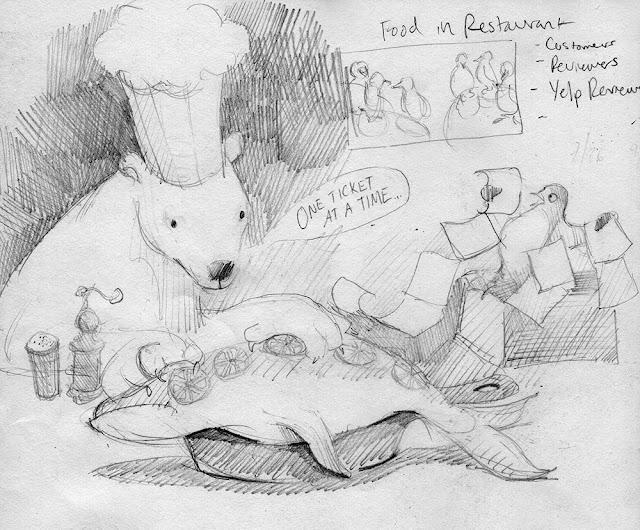 The polar bear, paired with penguins, started to look more racially specific than I wanted. And since the polar bear was the one in the know, teaching the penguin what it takes to open and run the restaurant, I wasn't happy with the unintended message. I could use a Grizzly or Kodiak bear instead, but there are so many sweet brown bear characters already out there. And there's the geography question. So I did some research, and discovered that Le Cordon Bleu, the premiere French cooking school, has a location in Peru, in South America. Perfect! I lived in neighboring Bolivia for 6 months, so I am familiar with the cuisine–and penguins live in Peru! So I started to sketch the most ubiquitous animal in that region–the llama! I remember being on a bus from La Paz to Tarija, and watching llamas running outside in the countryside. They looked so funny with their silly oversized ears bouncing as they ran. Definitely a fun character–though I defer to Anna Dewdney's LLAMA, LLAMA series as the best version of a llama in children's literature.

I also decided that though the penguins could remain, the main penguin needed to be swapped with another character. So I sketched a goat. Soon their personalities started to emerge in the sketches. 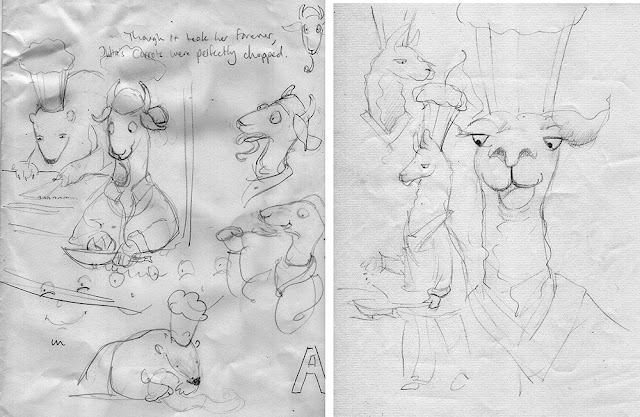 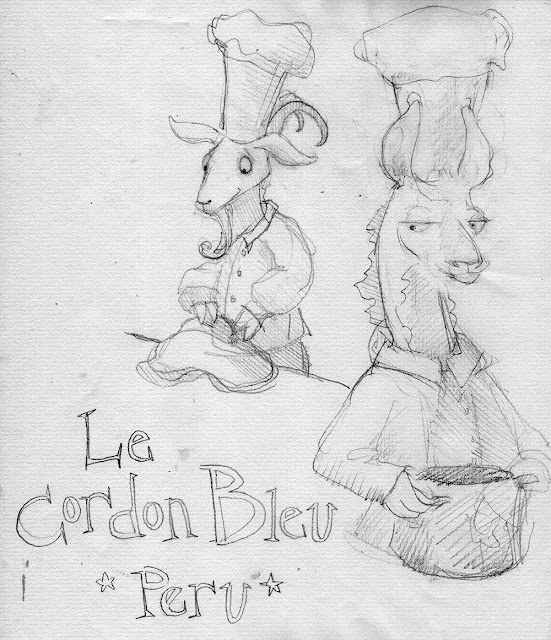 After sketching quick then detailed versions of the goat and the llama, I had an idea of where the story would go. So with the opportunity to do a finished piece, I looked through and decided to combine these two sketches. One included the polar bear, now just a line cook–and penguins as both servers and chefs. But the main characters are now the goat and llama. 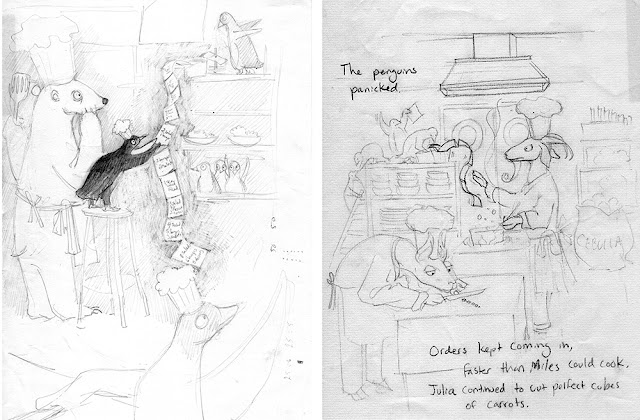 I combined the sketches in PhotoShop, moving elements around and creating a more interesting composition. As I write this though, I see I still have a change to make. The goat looks more interesting facing the original direction. 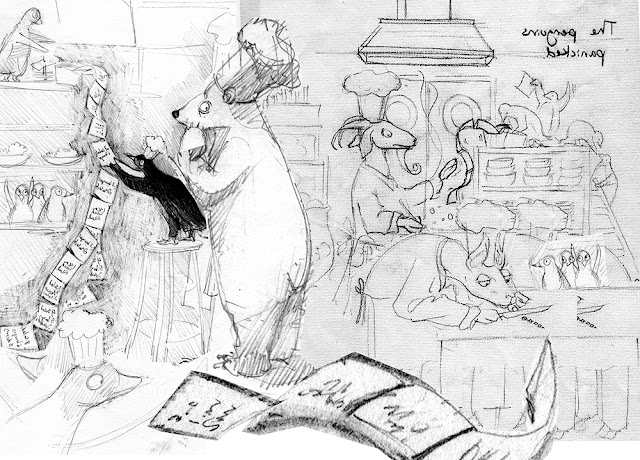 Although I'll go back and tweak the goat's position, this is the version I sketched on watercolor paper. I'll now use this as a color study. I'll be sure to post the next steps in an upcoming post. Stay tuned!
And if you have any feedback, I'm happy to hear it. 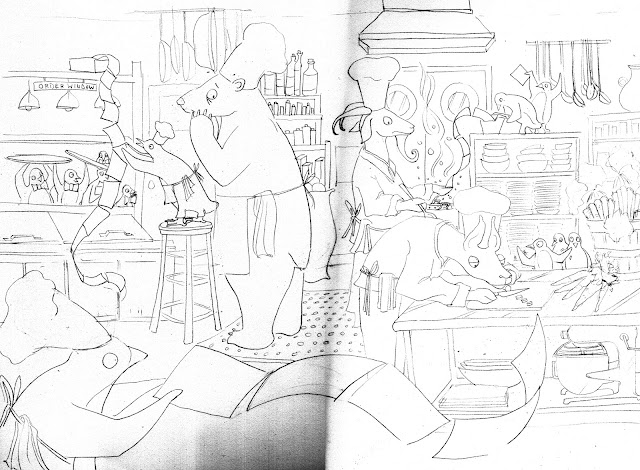 RENATO AND THE LION
by Barbara DiLorenzo
Now booking author visits for 2017-2018!

Posted by Barbara DiLorenzo at 8:14 AM