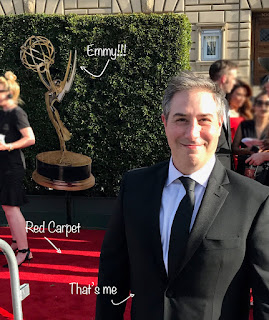 I know this isn’t kidlit related at the start but stick with it.  I’ll bring it back around. I promise.

So, a few months ago I was nominated for an Emmy.

Well... a Daytime Emmy.  Same trophy -- I swear.  Best Art Direction.  It was my first nomination and I was really excited.  I got out my tux.  I found the moth holes.  Bought another tux (and some moth repellent.)  I got on a plane and flew out to California for the awards.  It was really exciting.  Me and my show friends got all dressed up and took pics. Pat Sajak was there!  There was a buffet and everything. We took our seats for the awards and about 4 minutes into the show they announced my category.  My heart was racing and my hands grew sweaty. And the nominees for Best Art Direction are…blah blah blah.  And then…

I lost. No trophy.

Ugh.  Sad.  It’s awful to lose. And it’s especially awful to lose on the third category of the evening.  It was a long show.  It threw me into a funk (No relation to Josh) for a few weeks.  A bunch of people correctly reminded me that it’s an honor to be nominated — which it is and I am honored.  I also took a look back at the work I did this past year and I’m really proud of what me and my small department were able to do under time and budget constraints.  The work was strong.

I’m feeling happier again but there’s something about writing these blogs that makes me contemplative.  So here's what I've come up with.  I’m sure I’ve written something to this effect before, but it’s really important to take a step back and look at what you've accomplished— especially in a creative field like television …or writing/illustrating for kids.  (I did it! I brought it back to kidlit.  I told you I would.  Ugh. I can’t believe you doubted me.)

I think sometimes we’re so busy with our heads down, doing the work and singularly focused on the goal at hand, that we don’t stop to look around to see what we’ve accomplished.  I didn’t win the award, but the nomination was amazing.  And even more importantly, the work was strong.  I’m sure any of you could relate.  When we are putting in the effort and working daily on a project, a sketch, a manuscript, a dummy; it can be hard to see the growth and achievement.  I promise you it’s there.  So take a few minutes and pat yourselves on the back for the growth you’ve had as an artist in the past few days/months/year.  Congratulate yourself on your accomplishments big and small.  And make yourself a trophy out of cheese.  You deserve it.  That’s what I did at the Emmys and no one looked at me funny at all.  I promise.


By day, Jason is an EMMY NOMINATED set designer for television, with credits that include Harry, The Meredith Vieira Show, Late Night with Conan O’Brien, and The Late Show with David Letterman. By night, Jason is an author and illustrator of children's books. You can find his debut picture book, Mr. Particular: The World's Choosiest Champion on shelves in bookstores everywhere. See Jason's work, both illustrations and set designs,  at www.jasonkirschner.com . Follow him on twitter @jason_kirschner.

Posted by Jason Kirschner at 1:32 PM